The Wife And The Widow Christian White Review

The Wife and the Widow by Christian White, published in 2019 by Affirm Press, is one of the most engrossing and interesting crime books I have read in a while.

Interesting because he uses a literary device I’ve never seen used before to execute a twist at the end.

If I tell you what it is, I’ll have to shoot you, because it’s a spoiler.

The Wife And The Widow By Christian White 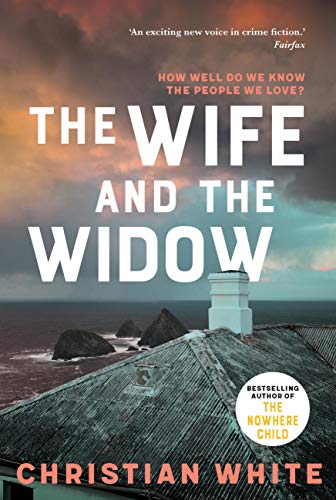 Rave Reviews For The Wife And The Widow

As mentioned in one of the reviews below, not everyone will be a fan of the ending, but you’ll keep reading regardless:

'The author does a vivid job of creating real characters and captures the alternately calm and claustrophobic feeling of island life. Some readers will find the twists fair and others, infuriating, but no doubt all will hang on to discover the ending.’ (Kirkus Reviews)

‘White is a master of the art of misdirection. Just when you think you have worked things out, he pulls back the curtain to reveal his cunning sleight of hand… Prepare to be dazzled.' (Sydney Morning Herald)

‘White delivers a shocking, excellently executed twist that will have readers re-examining their assumptions.’ (Booklist)

The Wife And The Widow Synopsis

Set against the backdrop of an eerie island town in the dead of winter, The Wife and The Widow is an unsettling thriller told from two perspectives:

Kate, a widow whose grief is compounded by what she learns about her dead husband’s secret life;

And Abby, an island local whose world is turned upside when she’s forced to confront the evidence of her husband’s guilt.

But nothing on this island is quite as it seems.

Only when these women come together can they discover the whole story about the men in their lives.

The Wife and the Widow takes you to a cliff edge and asks the question: how well do we really know the people we love?

As mentioned in the synopsis, the book is told from two perspectives; Kate, the widow, and Abby, the wife, and this is done in alternating chapters.

The author hooks us in from the start, with Kate’s husband missing.

His use of alternating chapters ramps up the suspense, and White is a master of the end-of-chapter hook. For example:

Kate has found a box in the attic of her holiday home which could reveal secrets:

She then climbed behind the wheel of her car, locked the doors and opened the box.

Abby is about to shine a light on an important clue to a murder:

She took hold of the pull string light switch in the middle of the garage, and took three deep breaths.

You can see how you would have to keep reading to find out the answers to those questions.

In fact, when I got to the end-of-chapter hook about the box, I was tired and wanted to go to sleep.

I found myself screaming silently, ‘What’s in the damn box? Don’t make me read another chapter before I find out!’

But of course, I had to.

A Taut And Pacy Style With An Eerie Island Setting

The writing style is taut and pacy, and the setting of Belport Island, a fictional island off the coast of Victoria, Australia, creates a tense and forbidding backdrop to the action.

It’s isolated, deserted of holidaymakers in winter when the book takes place, and the weather is bleak and miserable.

Just enough to create atmosphere and authenticity without overdoing it, and he has a nice turn of phrase:

To the north, the town spread out like barnacles on the overturned belly of a whale.

The Sky Winder, a famously dull roller coaster, stood still and silent, its scaffolding like a giant, jagged ribcage.

The waves and salty air had stained the walls of the building pale green, and its roof was Jackson Pollocked with bird shit.

I felt empathy with both the main characters as they changed and developed throughout the book.

The minor characters are also well fleshed out; if a little clichéd in places.

There are lots of subtleties within the plot, and when you come to the final twist, I guarantee it will make you stop and think back over the story to see how the author has set it up.

Unfortunately for White, now he’s used it once, we’re awake to him.

He won’t be able to do it again and surprise us.

Christian White Author of The Wife And The Widow

Christian White is an Australian author who lives in Melbourne.

His debut novel, Nowhere Child, won the 2017 Victorian Premier’s Literary Award for an Unpublished Manuscript, and was subsequently published to international acclaim.

His ‘overnight success’ in the literary world took 15 years and four previous novels that never saw the light of day.

Christian's first profession was as a screenwriter.

He co-created the television series Carnivores, currently in development.

And he also co-wrote Relic, a psychological horror feature film to be produced by Carver Films.

The Wife and The Widow became an instant best seller and has been shortlisted for the 2020 Australian Indie Book Awards for best fiction.

It has cemented White’s reputation as a master thriller writer

However It Wasn't All Wine And Roses

He’s had a variety of occupations, from driving a food cart on a golf course to editing videos for an adult film company.

Occupations which eminently qualify him to be an author. Every life experience is grist to the writer’s mill.

Like many authors, he was a voracious reader as a child and began writing stories.

As he grew older, crime thrillers became his favourite genre, but it took him a while to realise that it was the genre he should be writing in.

‘It seems very obvious now to write what you enjoy reading, but it took me a long time to figure that out.' Click here to read the full interview in Booktopia

What stalled him initially was a lack of faith in his ability - in particular, to write the clever twists necessary in a thriller.

But once he started, he proved himself spectacularly wrong.

So You Want To Be A Writer Podcast

Click the image above to listen to an interview with Christian by Valerie Khoo and Allison Tait on the podcast So You Want To Be A Writer.

Click the image below to go to the Better Reading website to listen to Christian being interviewed by Cheryl Akle or click on the podcast sound file below to listen while you read this post. The Wife And The Widow Conclusion

While I haven’t read Nowhere Child yet, many reviewers claim that The Wife and the Widow is even better.

If you like dark, twisty thrillers with an ending you will definitely not guess, I thoroughly recommend this book.

The Wife And The Widow

Other Books By Christian White