If you’re an Aussie and a book lover, and haven’t heard about Boy Swallows Universe by Trent Dalton, then you’ve been living in a cave for the past year.

Even if you’re not an Aussie, you may know about it, as it’s been an international success.

The book has been selling like crazy and has exposed Dalton's work to a whole new audience. 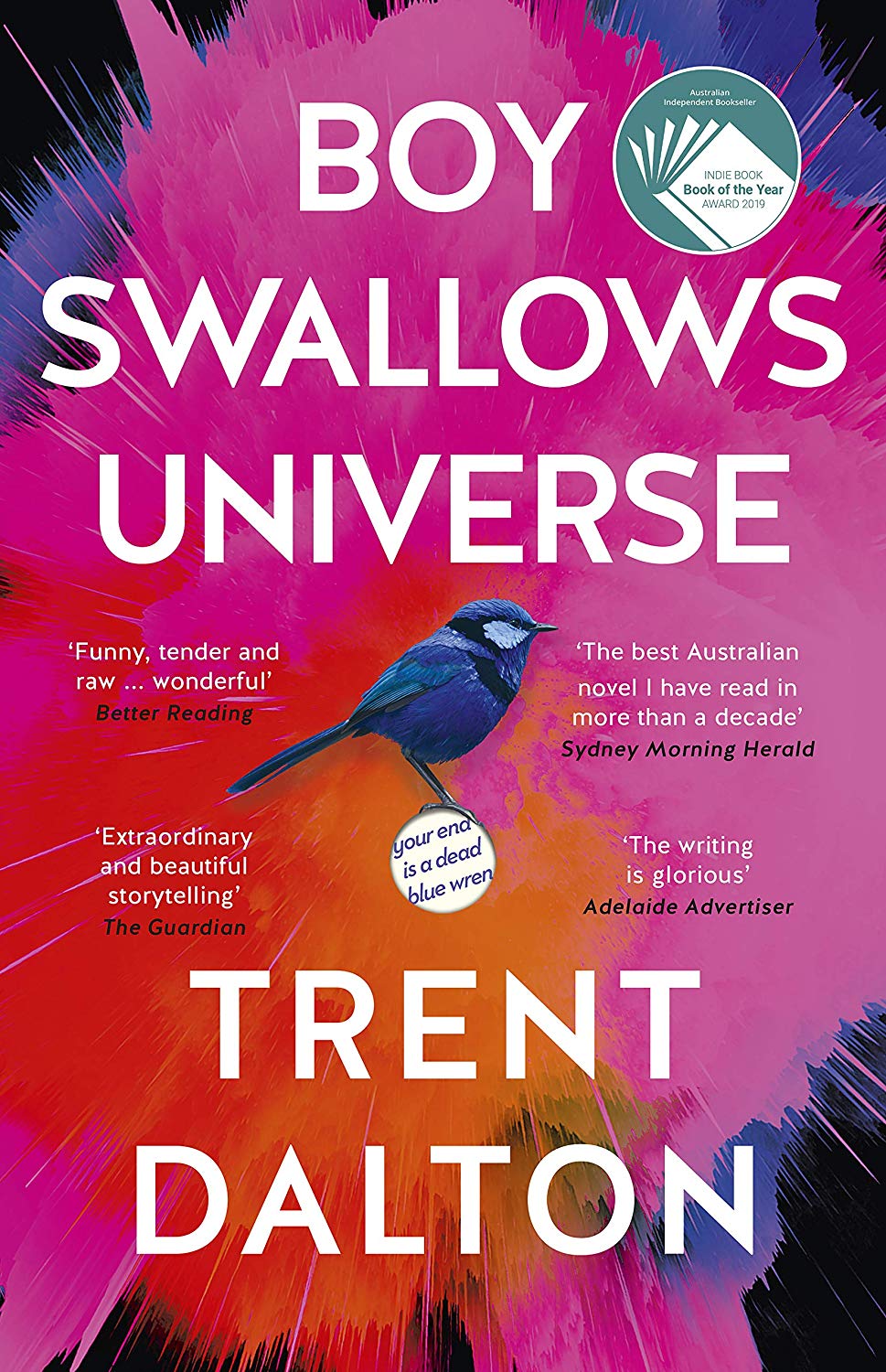 There have been many superlatives to describe this multiple award-winning Australian novel since its publication in July 2018.

‘The most heartbreaking, joyous and exhilarating novel you will read all year.’

They’re all spot-on, but the one thing I find most intriguing about this book is that it ‘shatters genre boundaries,’ as one reviewer put it.

It straddles so many different genres it defies classification.

It’s a coming of age story, but it’s also a crime, suspense and thriller novel with a blend of romance and a touch of the supernatural.

However, I’m featuring Boy Swallows Universe in the Crime Fiction category, because crime and criminals are an integral part of the story.

The book is based on author Trent Dalton’s childhood in a working class suburb of Brisbane in the 1980s. Here’s the blurb:

Brisbane, 1983: A lost father, a mute brother, a mum in jail, a heroin dealer for a stepfather and a notorious crim for a babysitter.

It's not as if Eli's life isn't complicated enough already.

He's just trying to follow his heart, learning what it takes to be a good man, but life just keeps throwing obstacles in the way - not least of which is Tytus Broz, legendary Brisbane drug dealer.

But Eli's life is about to get a whole lot more serious.

He's about to meet the father he doesn’t remember, break into Boggo Road Jail on Christmas Day to rescue his Mum, come face to face with the criminals who tore his world apart, and fall in love with the girl of his dreams.

And if that doesn’t sound intriguing enough, there’s the supernatural element.

In fact, the book starts off with it:

Your end is a dead blue wren.

It’s a prediction made by Eli’s brother August, and one of the many mysteries that keep you reading the book.

It’s not until the end that you find out what it means, and it’s a testament to Dalton’s skill that he weaves it into the story without losing credibility.

His mother and stepfather go to jail for drug dealing and he and August go to live with their alcoholic father.

Eli decides to rescue his Mum from jail, inspired by the experiences of his babysitter Slim, also a convicted murderer and jail escapee.

His blossoming friendship with journalist Caitlyn Spies, and the growing realisation of something terrible and sinister taking place in his neighbourhood.

Eli is trying to figure out how to be a good person, while still loving people who’ve done bad things.

The book morphs seamlessly from crime to suspense to thriller.

The characters are all beautifully portrayed and tug at your heartstrings, especially Eli and August.

Even the baddies elicit some empathy.

Yet Dalton has the gift of restraint and never descends into sentimentality.

Eli and August are wise beyond their years. They’ve had to be, with the sort of upbringing they’ve had.

But I did wonder at times if they were a little bit too astute and savvy for their ages.

In the interests of literary licence and because I was enjoying the book, I accepted it and went with the flow.

By now, you’re probably thinking, ‘If this is based on real life, what sort of a life did the author have?’ 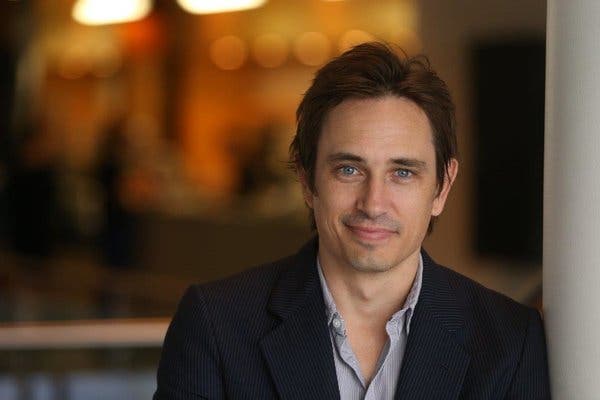 In the many interviews Dalton has undertaken since Boy Swallows Universe was published, he is completely honest and upfront about his own experiences.

It’s true that his mother and stepfather were drug addicts and went to jail.

And that he and his three older brothers went to live with their alcoholic father, who, incidentally, loved literature and was a voracious reader.

It’s also true that Dalton had a convicted murderer for a babysitter.

Arthur ‘Slim’ Halliday, known as the Houdini of Boggo Road, as he escaped twice from that prison, though he was re-captured both times.

But many of the events later in the book are fictional and Dalton says that the book is a 50-50 mix of fact and fiction.

His mother, today a contented suburban grandmother in her late 60s, was the first to read the finished manuscript.

‘I told her, “Look, if you don’t like any of this, it goes straight in the bin, that’s it, don’t say another word,”’ Dalton says, in an interview with the Townsville Bulletin newspaper.

‘I was working away at work one day and she called my mobile and said, “Trent, it’s beautiful and I think so many people can get so much out of it.”’

‘That’s the greatest gift she could give me.

I wanted to do it in the right way so I tried to change something pretty dark and terrible into something beautiful.’

I, for one, am glad his mother liked it. I’d hate to think of such a literary masterpiece being consigned to the rubbish bin.

Dalton’s writing style is a delight.

In this thoroughly engrossing story, many reviewers have referred to a magical element in his writing.

His prose is lyrical and poetic, but at the same time simple and direct. Such as:

A yellow fluffy toilet mat the colour of a baby chick is soaked in piss in the corner beside a toilet brush leaning against the wall.

All the Vietnamese mums in Darra have the same look: big black hair in a bun so heavily treated it can bounce light beams, white powdery foundation on their cheeks and long black eyelashes that make them look permanently startled.

Teddy has big, black curly hair and olive skin and a thick black moustache, the kind Slim says are worn by men with big egos and small pricks.

There’s nothing pretentious about his writing.

I think this is why it’s one of those rare books to garner both popular and critical acclaim.

Another astonishing aspect of this book is that it’s Dalton’s debut novel.

However, as a journalist by profession he had already built up a devout following of readers from his feature articles for the Week-end Australian magazine.  As he says in this interview on the Harper Collins blog

‘I’m a journalist who has written thousands of words about the most harrowing stories about Australian life in the suburbs… tragedy, violence, trauma, upheaval, betrayal, death, destruction, families, abandonment, drugs, crime, hope and healing, no hope, no healing.’

I’m always interested in an author’s writing process and in Dalton’s case his journalistic background came to the fore.

When those three words came to him, he was immediately energised and knew it had to be a book. Here he explains what it means: Houdini The Escapist.

‘It is essentially a way I have honestly tried to approach life: Just take it in. Don’t just write about one thing, take it all in. Take every last aspect, take all the dark, take all the light, take the whole universe in.

That’s what the kid in the book is doing, just going for it. That can be dangerous, but I love when anyone does that, just owns it. That’s what helps us survive.’

Once he had the idea, it was a case of sitting down every night for a year after his two young daughters had gone to bed, and writing it, like a man possessed.

‘I’d go and write in my kids’ rumpus room among piles of Lego and princesses, along with a shelf of my favourite novels and my wall of Pearl Jam vinyl,’ he said in an interview with Perth Now.

Dalton writes his feature articles with a deft, light touch, yet they are full of emotional depth and compassion.

I’ve been a fan of his journalism for ages and once I wrote to him to tell him.

He’d written an article about a 12 year old girl from the outback leaving the family home to go to boarding school, and what a wrench it was for her and her family.

But they had no choice; it was the only way she could get a secondary education.

The story was so moving and poignant it brought tears to my eyes – not least because I went to boarding school myself at the age of 12.

Different circumstances – I didn’t have to go, it was a choice, but that didn’t make it any the less harrowing.

I emailed Dalton, told him how much I’d enjoyed the article and ended with, ’You could make a rock cry. You should be writing a novel.’

What do you know, he took my advice and four years later there it was!

I’d like to think that in some small way I contributed to the book – I’m going to claim it regardless.

I met him last year at the Brisbane Writers Festival and after taking my place in the very long queue to have my book signed, I told him about the email I’d sent.

He looked up at me, concerned.

I assured him he had, but that sums him up exactly – he’s Mr Nice Guy personified.

He has an exuberant charm and treats everyone he meets as his best friend.

If he were a dog, he’d be a Labrador – bouncy and affectionate. You’ll see what I mean if you listen to his interviews: 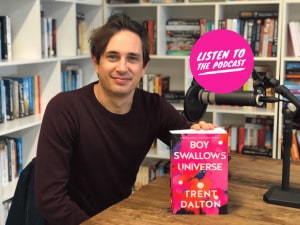 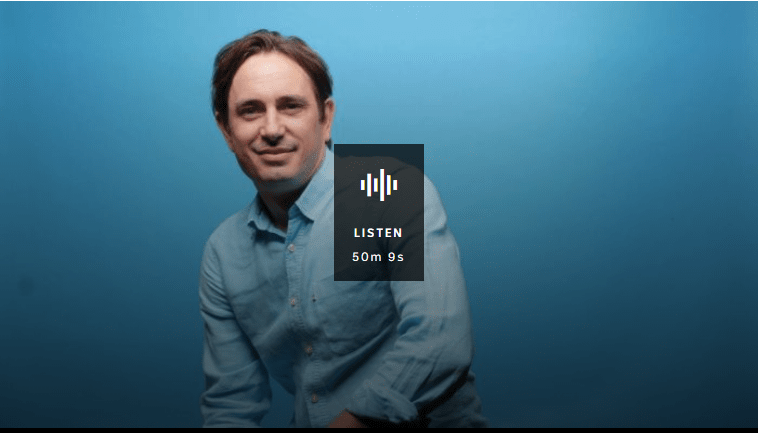 Apparently I’m not the only Dalton groupie.

Catherine Milne, head of fiction at publisher Harper Collins, had long been an admirer of Dalton’s feature journalism.

She made a trip to Brisbane to ask him if he had a book in him.

‘I thought he would want to write non-fiction, but he surprised me when he said he wanted to write a novel,’ says Milne.

‘A week later he sent me his first draft chapter of Boy Swallows Universe and I acquired the book on the basis of that.

I’m in awe of his writing talent, because apart from a little editing, that first chapter he sent me has hardly changed in the finished book.’

I don’t want to say, ‘the rest is history,’ because it’s such a cliché, but you get the drift.

Boy Swallows Universe has won numerous awards, including a record four awards at the Australian Book Industry Awards in 2019.

It is now an international bestseller, published in more than 28 languages.

The book is being adapted for the small screen, with acclaimed Australian actor, writer and director Joel Edgerton as producer.

Dalton is currently writing his second novel, but is keeping the details close to his chest.

I’ll let him have the final word.

Boy Swallows Universe, he says, is essentially a love story.